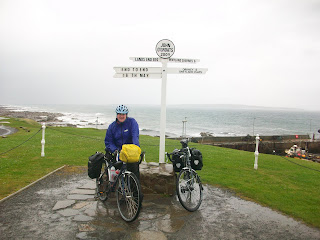 The forecast rain arrived and we set off from Wick with a strong cross wind and driving rain. Took us an hour and a half to do the 17 miles to John O' Groats. We saw a couple of End to Enders going the other way, south to Wick and beyond. We arrived at JOG cold and wet. I was so cold I couldn't write properly on the post cards I'd bought. We had photos taken then warmed up whilst drinking coffee at a cafe.

Then we set off westward along the North coast, with the wind, thankfully, now right behind us. It was still raining but we gradually warmed up on the road to Thurso. Saw plenty of Lejoggers nearing the end of their quest.

We lunched in a bus shelter at Thurso and carried on past the Dounreay Nuclear Power Station. The road had been pretty flat and the scenery uninspiring up to now, but at the Bridge of Forss, we started to hit the hills. The weather cleared up after lunch and the sun even made a momentary appearance at one point. We stopped for a warm drink at Melvich. The landlord said he gets quite a few End-to-End cyclists in. The fastest were 3 guys who'd ridden up from Lands End in 3 days, riding for 20 hours a day. The slowest were a group of 70 year old ladies who'd taken 6 weeks. After Melvich, the route became ever more hilly but the views across the mountains and out to sea were great. We rolled into Bettyhill just after 5pm, having covered 70 miles.
I'm glad we had a tailwind today, I don't think we'd have made it into a headwind in that weather. Bettyhill is very picturesque with great views of across a sandy bay. 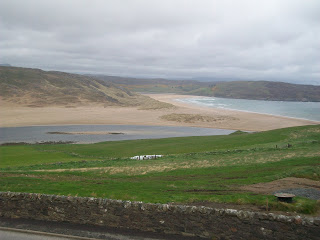 We head inland tomorrow and finally start heading south. Hoping for better weather, we've got 55 miles to do and it's pretty flat, by all accounts.